Amusement Parks of the United States

Amusement parks are excellent places to spend time with your family. They can be perfect for a fun getaway for a day, or you can organize an entire vacation around it to really take your time and enjoy the experience. Amusement parks provide fun for people of all ages, but depending on the ages of your children, you'll want to do some research first. Many rides have height requirements, and certain parks cater to younger children more than others.

Read on to find out more information on some of the best amusements parks in the United States.

One of the oldest amusement parks in the U.S., this 364-acre attraction overlooks Lake Erie in Sandusky, Ohio, and features some of the best rollercoasters in the world. Cedar Point is the only park with four rollercoasters taller than 200 feet. The rest of the park's 72 rides give their guests a great experience daily during the season starting in mid-May till the beginning of September.

According to Jason Bean, the author of a blog post on one of the park's newest coasters, Cedar Point is a rollercoaster lover's nirvana. If you plan to visit Cedar Point, be ready to have the park's signature catchphrase stuck in your head for a few days after your trip: "Enjoy your day at Cedar Point: America's Roller Coast, Ride On!"

Family-owned and operated, Knoebels has been America's largest free-admission park for over 85 years. Instead of charging for admission, the park charges per ride. Guests can, however, purchase a Pay-One-Price plan which allows them to ride multiple rides after paying one larger fee. The park features 57 rides, including two unique wooden rollercoasters and a haunted house ride that was featured on the Discovery Channel. The park is also known for its food, which has won several Amusement Park Today Golden Ticket Awards for Best Amusement Park Food.

Roughly a quarter mile from the amusement park is Knoebels' Three Ponds Golf Course. The course is an 18-hole regulation length golf course that features four sets of tee boxes for a fun and challenging experience. The golf course features a membership program as well as golf packages, with prices listed per person.

The Magic Kingdom Park, located in Bay Lake, Florida, is the first of four theme parks at the Walt Disney World Resort. Similar in some ways but decidedly different in others from Disneyland in California, Magic Kingdom is focused more on fairy tales and other Disney characters.

Magic Kingdom is much more than just a park with rollercoasters and other rides. It is divided into six themed "lands"— Adventureland, Frontierland, Liberty Square, Fantasyland, Tomorrowland and Main Street, U.S.A. — featuring ride attractions, shops selling Disney merchandise and food, musical parades, and firework shows. If you plan to spend one day or even several at Magic Kingdom, there are a number of lodging options, including several resorts and hotels owned and operated by Disney.

Started as a leisure park for the employees of the Hershey Chocolate Company, Hersheypark has evolved into one of the top amusement park destinations in the country. Hersheypark has over 65 rides, including the first looping rollercoaster on the East Coast. The park has recently started expanding the waterpark area of the park.

In addition to rides, Hersheypark also features several shows in different venues, including the Music Box Theater and the Hersheypark Amphitheater. Guests will most likely see other performances throughout the park as they walk from ride to ride.

This theme park gets its name from Walter Knott's berry farm, which used to reside on the land where the park now stands in Buena Park, California. Now one of the best amusement parks in the U.S., Knott's Berry Farm has developed into five distinct themed areas: Ghost Town, Fiesta Village, The Boardwalk, Camp Snoopy, and Indian Trails. Like most parks, in addition to the rides, the park also features several places to buy souvenirs, purchase food, or stay the night. The park has its own hotel, though there are several other hotels located close to the park if you prefer that route.

Are you looking for more family-fun adventures this summer? Here's a list of Great Zoos Around the World!

Amusement Parks Around the World 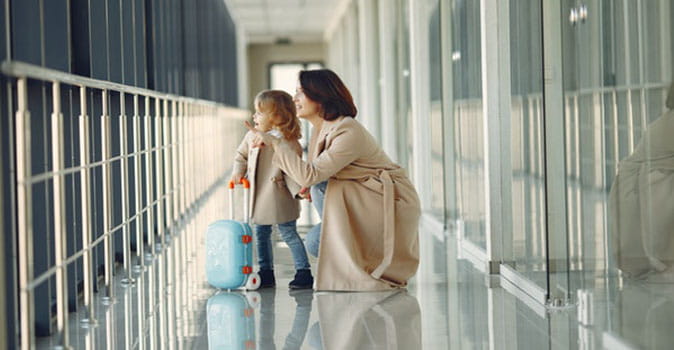 How to Fly With Kids

Will They Remember Family Trips?