Traveling to Sochi, Russia, this year for the Winter Olympics? We've got a list of five Russian foods and Sochi cuisine that you'll definitely want to sample while you are there, along with a list of five foods you should avoid if you're at all queasy when trying new foods and textures. 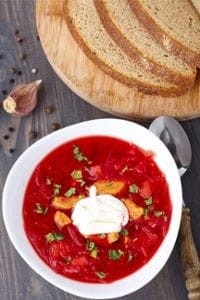 A Ukrainian beet-based soup, this is also an extremely popular dish in Russia. For vegetarians heading to the Olympics, this is a great option and the potatoes and other root vegetables will be a great comfort food for the cold weather.

Borsch can be served a variety of ways: thick and hearty or clear and light, and it can be enjoyed either hot or cold. If you want yours on the thick side, a test to try to be sure your borsch is on the right track is to see if the spoon will stand on the surface of the soup. One serving suggestion most can agree on is the finishing touch of a dollop of sour cream!

Often served on a sandwich with pickles and mayo, canned herring has been a longtime staple for Eastern European countries, and it's sure to be a main staple in Sochi among the locals. But be careful with this one. If you've ever had any reluctance with any kind of seafood, you might want to steer clear of this extra-fishy fish. 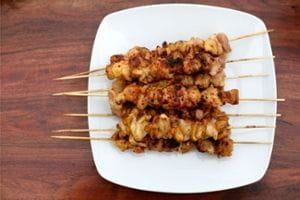 This is Russia's version of the kebab. Most nations across the globe generally perfect at least one culinary dish and, in Russia, they've certainly nailed the Kebab. Shashlik usually consists of skewered marinated lamb and vegetables, cooked over an open fire.

Traditionally, Shashlik was prepared by marinating the meat in vinegar or lemon juice, but today each family has its own secret marinade recipe. The important thing to remember when choosing a marinade is to be sure it enhances the meat's flavor. Many shashlik veterans also stress the importance of kneading the marinade into the meat. Any way you choose to prepare it (or where you order it cooked for you), shashlik is sure to be a treat! 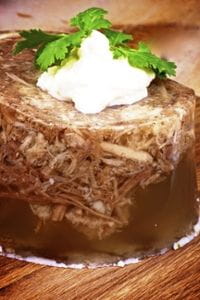 It's as bad as it sounds and looks a bit worse. While many Russians have grown up with this dish, many Americans have a hard time getting past the texture — gelatinous pig — and are further weirded-out by the combination of meat flavor and Jell-O-like wiggle. Most traditional holodets dishes are prepared with cuts of meat, as well as vegetables and spices, all combined in the gelatin mold.

This dish is usually served for Russian holiday tables, so you might be able to easily dodge it while in Sochi.

This meat-and-potatoes stew is a definite must at the Winter Games this year both because it'll be a great cold-weather dish and because it's a classic example of the dill, sour cream, potato, and beef flavors that are representative of other Russian dishes.

What sets Zharkoye apart from other stews and soups is the fact that the vegetables and beef are fried in butter before being tossed together into a pot with broth. 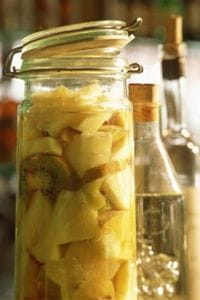 While pickling has always been a huge part of Russia's cuisine (they pickle everything) you might want to stay away from their pickled fruit, like watermelon. Instead, stick to pickled cabbage, cucumbers, and less-sweet food flavors.

Russia's long-standing tradition of pickling almost everything stems from food shortages, and the long, vicious winters where fresh produce was a rarity. Russians will salt and soak anything they think will last the winter, which includes fresh fruit — something that wasn't always available for the greater part of the year. 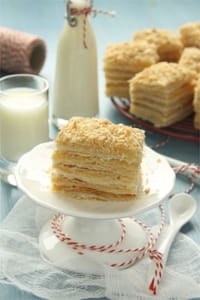 While originally stemming from France as Mille-feuille (thousand-layer) cake, this 15-layer cake is a classic among Russian families. This has a custard filling — like a vanilla cream — that is put between layers of dough.

The French version is normally topped with intricate, patterned icing, while the Russian version is topped with crumbled pastry. To speed up the preparation, many recipes call for store-bought puff pastry, which eliminates the timely process of making the dough from scratch. 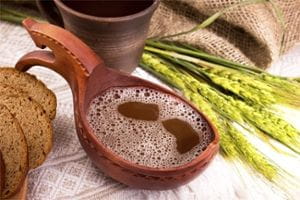 While it may be full of Vitamin B and the ability to possibly cure hangovers, this drink has been fermented from stale, sourdough bread and has an old, musty flavor to it. You might want to avoid this if you aren't the bravest of drinkers.

Kvass makers start by soaking Russian brown bread in water, and adding yeast and other additions like raisins, honey, or mint, which vary from recipe to recipe. The mixture ferments for a few days, which creates a natural carbonation, as well as its distinct sour flavor. Historically, Russian children have lined up to get their cup of kvass during sweltering summer days — similar to American kids who track down the ice cream truck for a refreshing treat. 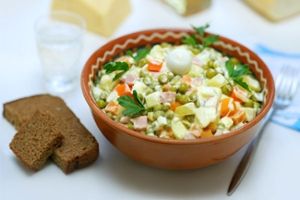 A Ukrainian take on the potato salad, this dish isn't too different from the flavors you'd expect from the potato salads you'd find at pitch-ins and barbeques. There's boiled potatoes, egg, mayo, and pickles — all what you'd recognize. But then add cold bologna, sausage, or some other type of meat along with peas. It&;#8217;s different, but something that's worth trying.

Sometimes referred to as the most traditional Russian dish, salad Olivier is served for holidays and parties, but is most well-known at the New Year's table. It's as traditional as the Thanksgiving turkey for Americans. 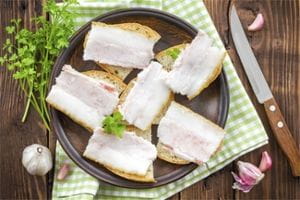 These are raw pieces of pig fat. They've been salt-cured or brine fermented, but not rendered, so it's still a far cry from bacon. While the texture can be difficult, true pork lovers will enjoy this — and, depending upon how cold it gets this year — it might help to add an extra layer of warmth.

Salo is aged in a dark, cold place and can last for more than a year — as long as it is not exposed to light or aged too long. This can cause the fat to oxidize and have a bitter taste. However, a bad batch of salo can make an excellent water-repellent for leather boots. Win-win!

A lot of vodka gets consumed in Russia each year, and, if you plan to partake, we highly recommend bison grass vodka. This has a smoother, sweeter taste than the vodka you might be used to.

Not heading out to Sochi, but still interested in trying some traditional Russian dishes? Follow this link for step-by-step recipes at Olga's Flavor Factory.